Can I touch it? Yes, you can! Not only that – you can start it up and try for yourself how it would have been to control the beautiful winding engine at Szyb Maciej (Maciej Shaft) near Zabrze in the Silesia region of Poland.

Built at the start of the 20th century, Szyb Maciej was used for ventilation, transport, drainage and extraction. In 1992, after the coal deposits had been exhausted, a decision was made to liquidate the entire Szyb Maciej infrastructure. However, Demex Mining Company stepped in suggesting an innovative use of the shaft by transforming it into a clean water source for the local area. In December 1993, for the first time in Poland, the pumps of the mine shaft-based drinking water source were put in motion. Demex then co-ordinated renovation and conservation works of the shaft and the nearby infrastructure including adapting the area for tourism and hospitality purposes. In 2005, Szyb Maciej joined the Industrial Monuments Route, and over the last few years it received numerous awards for the innovative adaptive use of a heritage building.

Today, Szyb Maciej combines a touring and learning experience with a leisure and catering offer. The luxury restaurant and bistro are located over two levels in what used to be the coal storage rooms with the original metal structures, doors and bolts still in place. 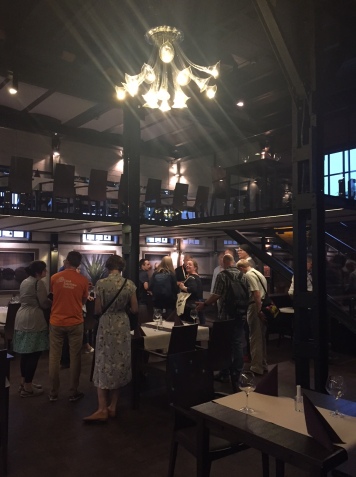 I visited this stunning building as part of the Study Tour during Industriada 2018. When we arrived at the bistro on the lower level there was a jolly music coming from the floor above. Guests were celebrating a wedding which had taken place earlier in the day in Szyb Maciej’s very own engine room. The ceremony had been held in front of the winding engine and the newlyweds had then turned it on for the first time as Mr & Mrs. 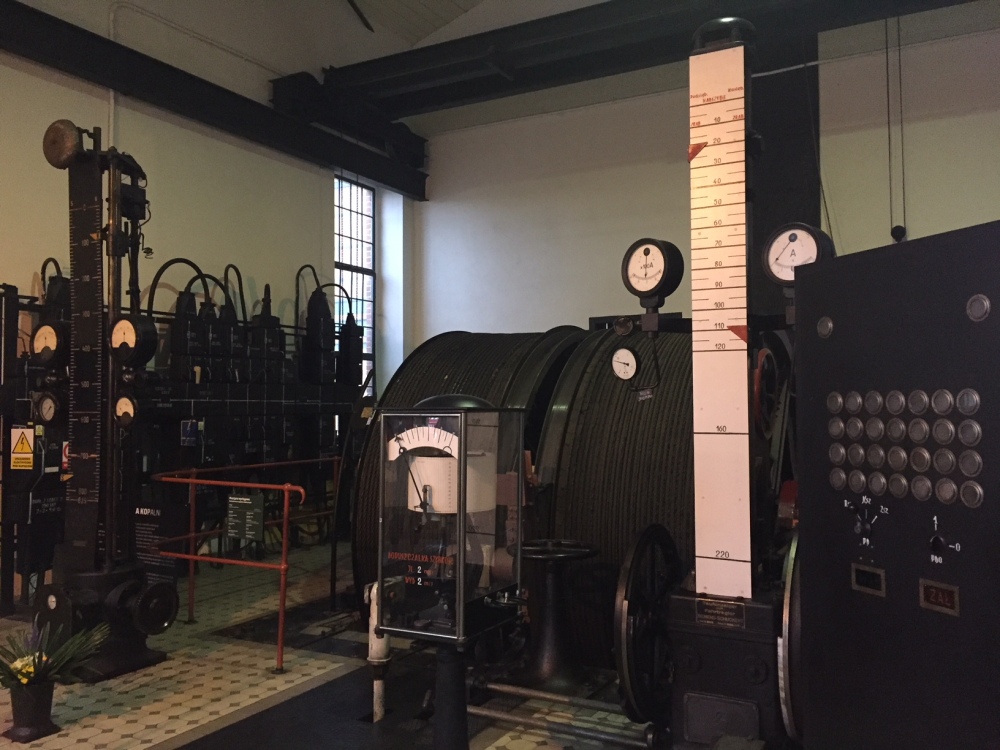 Visitors to Szyb Maciej are actively encouraged to work the winding engine and when the guide asked for a volunteer I was the first in line. Once I moved the right lever forward my heart skipped a bit – I did it way too fast! The red pointer on the levels board shot up and the guide chuckled. He then explained that only a very gentle touch is needed to bring the engine to life. He helped me readjust, get the levels right and then stop the engine allowing others to have a go. The chance to see a functioning 100-year-old mining equipment is fascinating in itself but to be able to make it work has made the experience unforgettable.

At the end of our tour we were led to a little control room below the ground. It was stuffy, dark and noisy. The strong smell of oil hit our noses before we even got to the bottom of the stairs and the heat followed. But when I looked around I could only see smiles on the red, sweaty faces. I was smiling myself. This was real. The director of Szyb Maciej, Zbigniew Barecki, then told us about a conversation he had had with some heritage experts a few years back when trying to decide what to do about the small, underground room. He asked them: ‘What should I change to make this place look better?’ And the answer was: ‘Nothing. The smell, the dirt, the noise – they make this place’.

I realise not all industrial heritage sites have a working machinery or are able to turn it on frequently. But if you do have something that works, turn it on! Let your visitors touch, smell and hear your engines, pumps and mills. Make their experience unforgettable too.